Admissions with a difference in EducAid Lumley, Freetown! 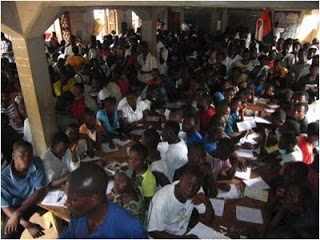 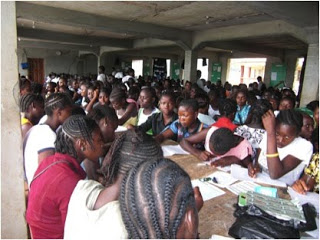 Top floor – Continuing Senior Secondary students.
Each year, the whole admissions process is somewhat unbelievable, with countless numbers applying for places in the EducAid schools. Often amongst them are many who have not meaningfully ever completed primary school, so are not able to come close to the appropriate standard. We test at the end of summer school, so that during the summer classes we can bring some of those who would be in our target population within range of secondary school work. This year, when we tested the new students at the end of summer school, we were really shocked at the poor standard of so many of the students, so we decided to give them a little more input before re-testing them. This has meant classes with standing room only for several weeks. On Monday we tested them again. Results were out this morning. Somewhat heart-breaking were the gleeful faces of those whose names were called and they realised they were being given a chance to continue with education. More heart-breaking were the faces of those whose names were not called, when they realised they weren’t!
The girls who fail the entrance exam have joined the Women’s Project and will work there until they are confident and competent enough to go to the mainstream classes. To the boys who fail the entrance exam, we have, reluctantly, to say ‘Goodbye’. EducAid has, however, admitted over 250 new students to the Lumley school and over 100 students each in Magbeni and Rolal. 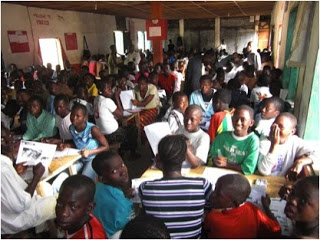 We were initially disappointed but…..
A few drops of hope in an ocean of injustice….