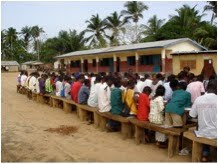 After my first ever week offline and away from EducAid, on holiday with some concerned school mates, we are now back! And we know we are back, not only because of the crazy humidity and heat! On arrival I was summonsed to an emergency meeting in Magbeni.

Before my departure, one of the village community had broken into the staff quarters and stolen a camera from one of the British volunteers, staying in Magbeni for 1 term. The thief had been identified and had been locked up in police cells.
The plot had considerably thickened by the time I got back. The paramount chief had had the suspect released so that local investigations could be done to locate the camera. He had been re-arrested and re-released before we eventually got to court yesterday and pushed for the matter to be taken seriously. During this whole period, a small but seemingly out of control minority within the village had started threatening to ‘deal with’ the teachers rather than see the thief prosecuted and things were not looking good. They had even gone and made a counter-report with the police accusing a couple of the teachers of having the camera and keeping it under wraps.
After several hours in court, the theft case was adjourned for judgement later this week and the thief was refused bail. The paramount chief then issued a summons to the elders in Magbeni insisting that they find the camera or risk arrest themselves. We had a meeting with the elders and insisted that they take control of the situation and all threats and allegations be dealt with appropriately. The teachers cannot stay in a village or community where they are not safe. While it was a minority causing the trouble, the majority took no strong line against the trouble makers.
The current compromise is that the teachers did not leave the village, as threatened, but are not running the school either. The prefects are supervising silent study for the live-in students and the community students live with their parents awaiting some change in attitude.
Some of the youngsters, who have been through EducAid and are now serving as junior staff, were literally sobbing while pleading with their compatriots to see sense and ensure the school is protected. The elders who promised action and protection, say the right thing but seem unwilling to commit themselves to standing out against bad or even criminal behaviour when it comes down to it.
Today, community representatives have been to the teachers to plead with them to restart teaching. They have not however, gone to the police and withdrawn the allegations. I am gently optimistic that they will see sense and it will be sorted out but there is a small possibility that we will have to withdraw from Magbeni. Once again, the future of the young and vulnerable is put in jeopardy by the greed, thoughtlessness, and weakness of their elders. A battle worth fighting to protect them? I think so!
Rolal is in the process of being extended and all staff and students who want to come with us will be welcome there.
Please God, it does not come to that ……
If you are interested in reading more about EducAid’s work please go to www.educaid.org.uk