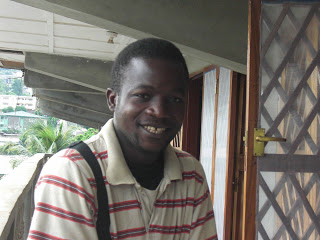 A very happy Musa ready for his adventure and a complete transformation of his life.

Engineering : )
Fantastic news – Musa Koroma is now our fourth EducAid student to be selected for an international scholarship. He is due to go to Russia for the new academic year to study engineering. We greatly appreciate the assistance that he has received from the friends of EducAid who sponsored him into Fourah Bay College from where he was able to so successfully apply. Without their help this next step would not have been possible.
Congratulations Musa and we wish you every success in such a challenging but exciting endeavour.
Engineering : ( 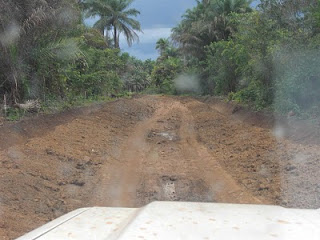 The newly re-engineered Magbeni road.
Still challenging but more frustrating than exciting. The engineers paid to ‘improve’ the road to Magbeni have thought it wise to put all the mud from their new drainage ditches in the middle of what was previously a sandy road which drained well! The result is that the five mile track which never caused any problems to cars, bikes or trucks, up to this point, has now been turned into a field. The result is that all the villages along the road are cut off for days every time it rains. This is rainy season. It rains a lot.
We have just had to make the decision to supply enough rice and stationery etc for the next 3 months as we are very unsure of being able to get through again. If I have an army on board I probably will be able to make it as they can offload and push but it becomes risky and is extremely annoying. Alhassan always ‘enjoyed’ the description of Sierra Leone as a developing country as he was only able to see potholes developing. This might well illustrate his point quite well.
Engineering : ) 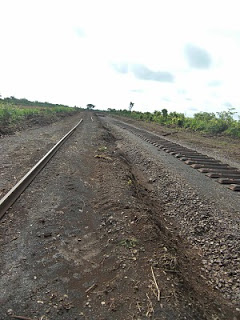 The new railway line under construction! 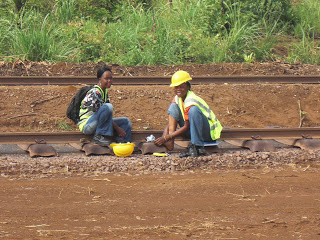 Female construction workers – definite signs of positive change.
Siaka Stevens, in his presidential role of father of the nation, helpfully sold the tracks of the entire railway which previously served Freetown and the provinces several decades ago but there is a new initiative to rebuild a single track which will reach to Lungi, Pepel and Port Loko. Maybe there is some development after all!

I must be back in Sierra Leone
What a team!