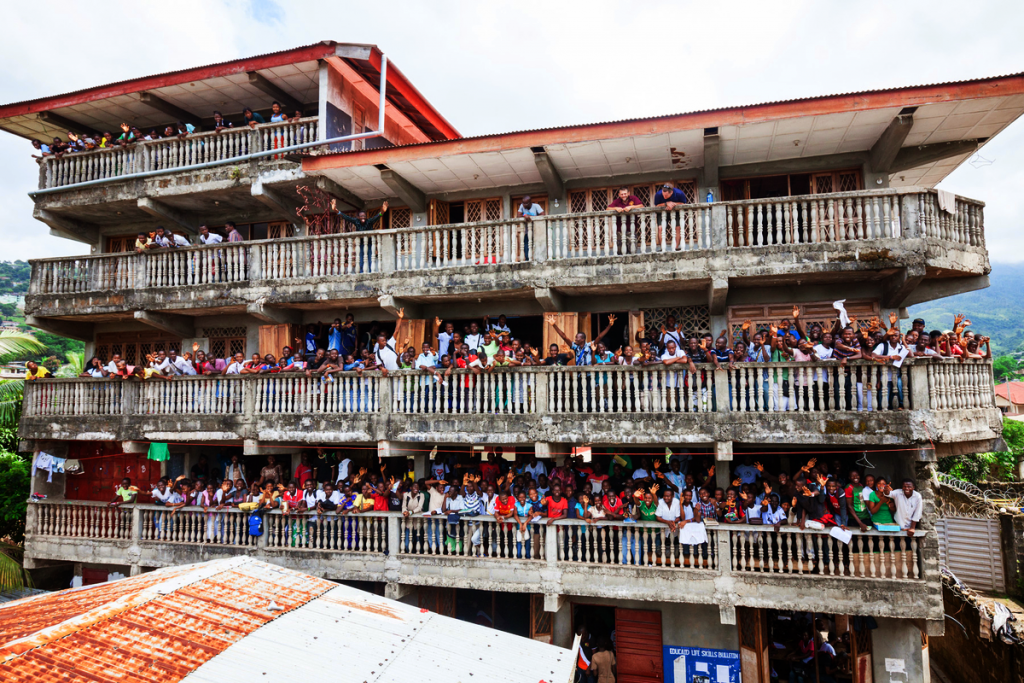 Sierra Leone is composed of 17 major tribal groups, all speaking different languages. Muslims make up the majority of the population, but Christians account for approximately 30% of the population. There are not so many foreigners from other African countries: a few Liberians and the occasional Guinean who have ended up in Sierra Leone, but the business world has a massive Lebanese and Indian presence. At times of significant political activity, the tribal allegiances are stressed due to the ethnographic divisions within the political system, but religious tolerance is the norm in Sierra Leone. With the enormous number of NGOs, there are many Westerners around Freetown and other populous cities too. This cultural mix is most present in the capital and in the larger towns, but does not extend much into the more rural areas or into the average school, for example. In general, the foreigners are known from afar. Many foreigners tend to live at what looks like a higher standard of living so the challenge for educators is not so much how to get young people to respect the foreigners, but more how to resist the inclination to see all that is foreign as better than all that is Sierra Leonean.

Within EducAid we encourage our students to have empathy, and to show kindness and respect to all those they encounter. This is based on a constant reinforcement of the profound belief that we are valuable because we ‘are’; because we are human, rather than because we ‘have’. However, within the school communities we find we have to spend considerable energy encouraging our youngsters to believe in Sierra Leone rather than see success in escaping it; to believe in themselves as valuable and having something to contribute to improving the country; to believe that we can learn from foreigners but not at the expense of self-respect as Sierra Leoneans.

If tolerance is to be sustainable and cooperation meaningful, it has to be based on how much we have in common as members of the human family, rather than emphasising our differences. EducAid believes in communication, in the empowerment of our students, and in sharing ideas: we encourage listening to each other – from the youngest student to the longest serving member of staff. In action, this includes daily ‘family’ meetings (8 – 10 strong groups of all different ages) whilst tutor groups (composed of 6 – 10 families) ensure that every individual is taken into account and has their views heard when planning events, making decisions about the day to day running of the schools, and how to address issues and make improvements. We welcome the opportunity to have incoming speakers to address the students and open up debate and exposure to different views.

In a context where access to the radio, to world news and to general knowledge is so limited, it is vital to actively address and challenge prejudices and to broaden horizons. The public exam curricula are narrow, so we look for every opportunity to encourage our pupils to get involved in extra-curricular activities that will open their eyes, and to provide opportunities for genuine education. In our view a holistic education will catalyse the evolution of globally competent, engaged citizens who don’t just tolerate diversity but revel and enthuse when given the chance to meet it; who don’t see foreigners as an opportunity to make money but as an opportunity to see things from a different perspective; who don’t just see foreigners as an economic opportunity but as fellow travellers with strengths and weaknesses to be understood and learned from.

If you are interested in knowing more about EducAid’s work with vulnerable Sierra Leoneans, please go to www.educaid.org.uk

If you are in a position to support our work, please go to www.educaid.org.uk/support-us/donate

What are the important skills, behaviours, and attitudes that students need to become contributing global citizens?
With a heavy heart, I will be stepping down as chief executive of EducAid