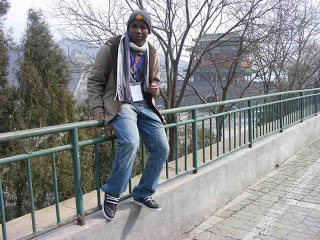 Issa in the cold
Issa has been in China for around 6 months. He was called by the Sierra Leonean embassy the other day for his impressive standard upheld throughout the term.
This is what he has to say for himself:
I became happy when I heard finally that I have been given this chance of studying in China. And I am trying to have fun, and be happy making use of this chance. Life which I believed should have gone astray after my B.E.C.E was finally denied by coming across Educaid my rescuer. Life today in china is as great as anything I might I had thought of in the world. As an Educaidian I am finding life very simple and exciting, despite the unfavourable weather which I have never experienced before. Starting life in China was a bit hard, because of the language barriers. Some of my friends only speak Portuguese, French and Arabic. But as we started classes it then became easier. Coping with the Chinese food was hard also. And the worst were the Chinese characters which I took to be fun. Having been in class with 14 different nationalities from different parts of the world, I became proud of the Educaid system. Like 100% attendance and excellent performance. Fortunately for me I have 6 Sierra Leoneans in my university. I normally spend time with them, so I am not missing home 100%. Travelling to Beijing with colleague was my biggest experience we went to many historical places. I normally spend my weekend walking around our 12 million inhabitants city called Tianjin. Playing football is my daily activity. First when we started classes one of my classmates from Djibouti was topping the class, because he had already studied Chinese for 1 year. By the end of last semester I made him uncomfortable by leading the class with a 93% average in 5 subjects. And now we are like brothers rather than friends. From the 17th-20th February we had the Sierra Leone students annual convention in Beijing which I was very happy to be part of. I had to move from my city to Beijing. I stayed with one of my Sierra Leone colleagues, whose father is working at the Sierra Leone embassy. His family was so kind to me. I spent 1 week with them. I met different personalities including the ambassador. We have finally started the second phase of the Chinese language including chemistry physics and mathematics all taught in Chinese. Challenging but exciting and I am hoping to do more than well in the public exam (HSK) that is the Chinese proficiency exam hopefully in May/June to start the course itself civil engineering taught in Chinese.If you are interested in knowing more about EducAid’s work please go to www.educaid.org.uk