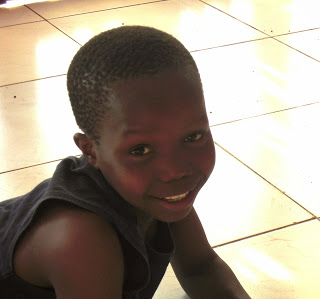 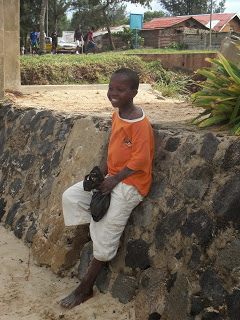 Saidu, always known as HipHop, for his easy ways and lack of fuss about anything – the little one who could sleep balanced on a bench or curled in a corner – had the most beautiful smile and was the sort of child everyone just wanted to take home with them; everyone except his family that is!  He had a very difficult childhood being passed backwards and forwards between indifferent relations and when he arrived in EducAid never left again.  He quietly got on with life and smiled his beautiful smile at nearly everything that happened.  The big dark spot that remained was the extreme pain he suffered when a sickle cell crisis attacked him.  He faced these with courage however and indeed they had seemed to diminish a little recently.  One of the causes of the crises is cold, so he and another sickle cell sufferer slept out of the way of the drafts, in the library, in general.  2 years ago, HipHop woke to find his co-sufferer dead by his side.  It cannot have been easy to know it could just as well have been him!  Today though, it was his turn.  The only student to have remained in Freetown for the holidays avoiding the up-country harmattan cold and winds, he had been staying with the Sesay family in the school compound and was taken in the early hours to the nearby hospital when a fiercer than usual crisis attacked.  There was nothing that could be done for him there and shortly after, he died.  Yet another terrible loss to the EducAid family and what an awful start to Christmas.
Our prayers are with him and all the EducAid family as we move forwards without him but in his name and the name of all those we have lost this year, we commit to ensuring that we use our lives that have been spared, as well as we possibly can to bring positive change in Sierra Leone and wherever we find ourselves.
If you wish to know more about EducAid’s work with vulnerable young Sierra Leoneans, please go to www.educaid.org.uk

One Response to One beautiful smile less this Christmas – HipHop RIP