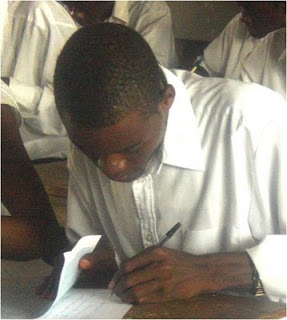 Teachers aren’t supposed to have favourites but somehow it is hard not to sometimes….

I have one in particular who I find humbling to work with because of how he is despite all he has been through.  He finished his final exams on Wednesday having very nearly lost his life to unspecified abdominal infections a few weeks before he started and it has probably taken the edge of his otherwise certain success.  He had worked unbelievably hard and, for example, was beating his entire class in maths, which as an arts student was even more impressive [the scientists usually expect to take that honour!].
Two volunteers have started a ‘Just-Giving’ page for him to see if we can get him to the UK for assessment. http://www.justgiving.com/abkappeal
He is a lot better than he was but not well.  There is no facility to test for what he probably has so he cannot be assessed and treatment administered.  The only option would be to sit back and watch him degenerate over time and offer palliative care.  Unthinkable.  Doctors at Addenbrookes Hospital, Cambridge are willing to offer their time for free and to work out a way forward.  We are in the process of trying to get him a passport and then a UK visa.  Impossible to say how desperately I hope it works out.  If there is any justice in this world, it will.