For those of you that have followed the ups and downs of Jimiyke’s progress over the last 18 months, these pictures will gladden your hearts.  After an extremely traumatic childhood, Jimiyke turned his life round when given the opportunity of free education, even becoming head boy when he reached the top of the school.  Just before he was due to sit his final exams he nearly died of TB.  He responded well to anti-TB treatment and so the doctors stopped his treatment. The course is an 8 month one. They treated him for 3! It could only happen in Sierra Leone. It was only later that we understood exactly what had gone on.
During his treatment around this time, he was also detected as Hep C positive which is a sure killer for 85% of cases if left untreated. At one point, we were told he might live for a year if handled carefully! Thanks to the intervention of some UK volunteers and their families, Jimiyke was taken for assessment to the UK. Extraordinarily, he turned out to be one of the 15%  who self heal and he was eventually declared fit and well.
TB is deceptive though.  Because he had started the anti-TB treatment, the infection had gone underground and could not be detected.  It came back though.  Earlier in 2010, an enormous TB abscess developed on his back which eventually put so much pressure on his spine that he lost the use of his legs.  I could not tell him so, but my doctor friends were telling us that there was little likelihood he would ever regain movement.
He is not fully fully recovered and still experiences some pain at times; he is not playing football yet but he walked several miles with me on the beach during the holidays and this is him dancing the new year in with the usual smile in place! 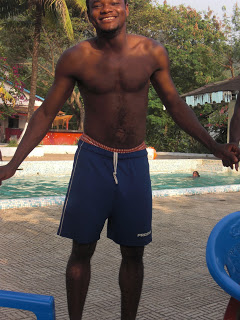 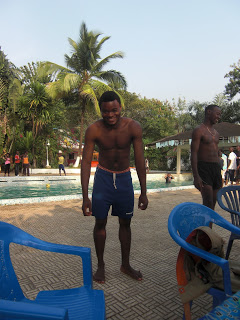 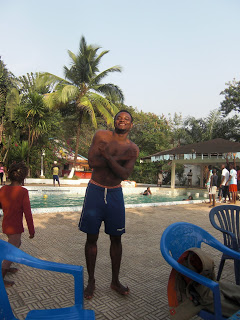 Jimiyke continues to be a role model to his companions.  He is making great strides in his IT competences and is taking a strong lead in developing the IT department across the programme.  We wish him every success in his future and a happy healthy 2011 and more.
If you are interested in knowing more about EducAid’s work with vulnerable young Sierra Leoneans please go to www.educaid.org.uk

The New Year birthday boys
Max and Charlie getting into their new life.