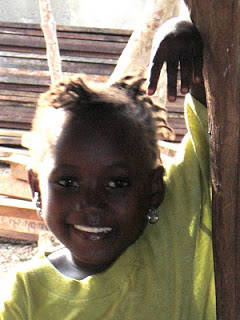 Aunty K with her beautiful smile
Kadiatu [commonly known as Aunty K] comes from Rolal village. She would spend day after day, hanging around the junior secondary school playing in the dirt, hoping for some attention and a bit of rice when they cooked. When she responded enthusiastically to the attempts of Steph and Emma [two British volunteers] to teach her the alphabet and the like, we decided to try and persuade her family to let her go to the primary school in Maronka.
Aunty K’s family consist of an unemployed father, a stream of ragamuffin brothers and sisters and a mother who goes mad for 2 years [apparently!!!] whenever she is pregnant. She has been horribly neglected in her younger years and was unlikely to ever be put into school by her family. After some battles with her grandmother, who found her quite a useful errand girl, we took her to Maronka. Under a year later, she is responding wonderfully. She is always at the top of her class, loves school and wants to be a teacher when she grows up.
I don’t know what her future will hold, of course, but I am very confident that her time in Maronka will have a dramatic and positive impact on her life chances and potential for achievement.
Aunty K is one of the youngest EducAid pupils but she is one of 100 who attend the Maronka primary school and one of 1400 who attend EducAid Sierra Leone schools.
If you are interested in supporting or knowing more about EducAid’s work please go to www.educaid.org.uk