October 27, 2010
This week, on a hot, humid and sunny morning in Port Loko the Furlonge EducAid Senior Secondary School was opened.
Peter Furlonge who, with his brother, had financed the construction, came specially with some friends and colleagues from the UK to officially open the new senior secondary school which has been built on the same site as the junior secondary school.
The students had prepared powerpoint presentations in their various clubs: The Virtual Palaeontologists, The Virtual Explorers, The Believers in Action, The Scientists, The Girl Power Group, The Librarians and so on. The White Ribbon Campaign signed all the men up for the international campaign for men against violence against women.  The Mathemagicians explained all their maths games and the drama group put on a mini play about the importance of educating girls. A couple of keen science students did some practical demonstrations in the science lab. &….there were brief and encouraging speeches from the key players: the donor of the land [generally known as HK], the donor of the construction money [Peter], and the conduit for the money – CEO of Children in Crisis [Koy Thompson].
The Ministry of Education were not represented. Would it by cynical to wonder if this is because of the lack of income likely to be derived, for anyone within the ministry, from a free school??? The opening ceremonies of private schools are usually fairly well attended by MoE officials!
The ceremony as such was very informal and the overall effect was pleasing. The students were inspirational in their enthusiasm for education and the confidence with which they spoke. The visitors seemed pleased with all they saw and have indicated a desire for on-going involvement in the project.
Staff and students worked hard behind the scenes to get the displays and presentations ready and indeed, sweeping and painting and clearing the building. Congratulations to all involved.
The first floor of the new building is finished. We plan to go up another floor before roofing and to establish the whole site as a centre of excellence for secondary teaching that teachers from all over the district can come and visit. Our dreams for Rolal and the community are many and we hope that, through the powerful tool that is education, real and sustainable prosperity may be achieved for this community and beyond. 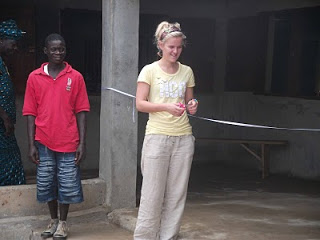 Georgie cuts the ribbon and officially opens the school. 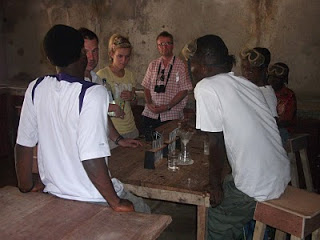 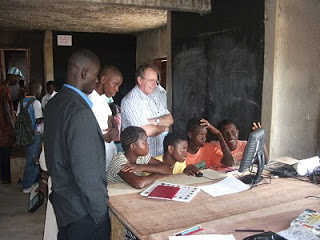 Peter, conscious of the importance of ICT for real education, was delighted to find computers in use in the new school. 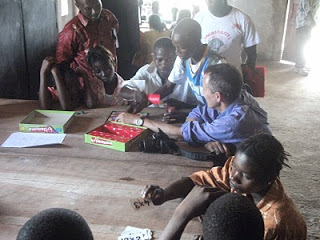 Koy enjoying a game of ‘Trilemma’ with the Mathemagicians, a short time before he explained his vision of Sierra Leone in 20 years time with a female president who would have been educated in the Furlonge EducAid Senior Secondary School.
If you are interested in knowing more about EducAid’s work with vulnerable Sierra Leoneans please go to www.educaid.org.uk