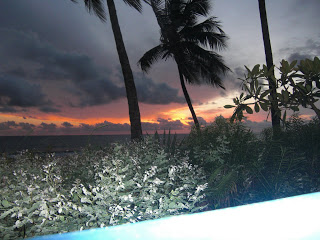 There are large numbers of Sierra Leonean youngsters who were taken off into the war and forced to do unspeakable things and who are still suffering from the effects.

The majority get little help beyond the long finished 6 month official disarmament, demobilisation, rehabilitation programmes. Equally, most go on into life with many key issues never having been addressed, living in the margins of society in and out of crime and detention.
We see some of our youngsters grasp the opportunity of education as a means out of their old lifestyle and a way of putting their old life behind them but for others there is a psychological battle that is much harder than just learning to read and write.
I had a heart-breaking conversation with one of our young men the other day. He has come on in leaps and bounds from when he first came to us. He was a tough cookie who kept himself to himself. It always seemed to me that he was on rebel alert at all times. You could imagine him, at the drop of a hat, taking off with his ever present rucksack on his back, never to be seen again.
His academic progress has been good and he has sat the first round of public exams but then seemed to come to a stand still.
It has taken some time for us to realise that a significant part of the problem is that he knows what he has done. He knows how terrible the things are that he did. He knows that many people would judge him as beyond hope, if they knew the things he has done. He himself is finding it all but impossible to see himself in any other light than as the perpetrator of terrible deeds.
This young man, at the age of ten, watched his friends being shot in front of him for crying and for refusing to take a gun. Yet, he cuts himself no slack for the conditions under which he agreed to fight and can not forgive himself. He sees himself as ‘that sort of person’ now. I found myself pleading with him to think back to who he was and how he was, before the war and to acknowledge that he was not always so. I pleaded with him to allow himself to move on and see himself in a different light, to believe he could leave that behind and be true to his real self which does not like violence.
It has become slowly clear that the self-perception of many of these young ex-combatants is generally the greatest barrier to progress for them. He is doing well so far. He has shown great determination to persist in his studies and become someone new but the battle is not over for him yet. He fears the judgement of others and still judges himself. The whole international community judges child fighters as victims of war. Let it be hoped that he too will allow himself some peace and start to see him as I see him: a young man of resilience and courage who has overcome appalling violence and trauma and who has dared to grow in new ways and take hold of new opportunities. On this more positive view, there will surely be a foundation for the building of something great.
If you are interested in knowing more about EducAid’s work with vulnerable young Sierra Leoneans please go to www.educaid.org.uk

One Response to A battle for the mind