A month or so ago, Issa Fowai, our second student to achieve international scholarship, set off across the world to study engineering in China. This was a fantastic achievement and was, surprisingly, done entirely on merit [Sierra Leone not being known for its meritocracy!].

He has kept us posted with news of the ups and downs and challenges. The first very difficult thing was that everyone had to undergo another medical examination on arrival. Many African students from the group were returned to their country of origin when it was discovered that there was something the matter with him. One Sierra Leonean, although he had done a couple of years in China already, tested positive for leukaemia and was put straight on the next plane back to Sierra Leone. Death sentence!
Issa has survived all the tests and has thrown himself into his Chinese studies with great enthusiasm. He has one year of Chinese before starting the engineering course proper. He is terrified, though, as they have told him that he will be going to some far flung part of China where the temperatures go down to -40! God bless him. We continue to pray for him and wish him all the very very best. 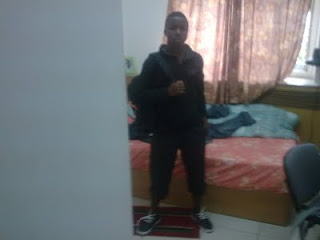 Issa, dressed for the weather, sets off to class. 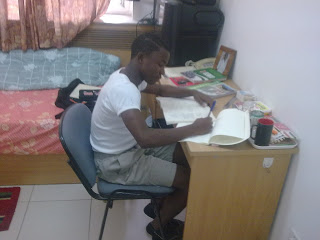 Issa takes on the massive new challenge of learning Chinese.

Working it out at 4 years old
EducAid on the BBC