March 21, 2011
In Lily’s own words…….
Mics, Chimps and Angel Delight                                                                        Lily Johnson
I was thinking of going to Alton Towers in February half term, but then I got an invitation to spend two weeks with EducAid in Sierra Leone. Guess which one I chose?
My dad, Richard, and I set off with a suitcase full of computer bits and science books for the students (along with Angel Delight and Ainsley Harriott’s ‘Cook in a Cup Cous Cous’ to keep us going). After spending our first weekend in Freetown, the capital of SL, we made the 5 hour journey, to Port Loko, along the dusty road, full of potholes. Well, more like dirt track! Thank goodness we weren’t there in the rainy season.  When we arrived at Rolal School, we were given more than a  warm welcome with people waving and greeting us.  We had been given a project – to lead the students in making a radio programme. Their microphones had been sitting in a cupboard for several months. But briefed by Chris and Julia Mann in radio techniques, we managed to get the equipment up and running. The students were very enthusiastic and formed their own production crew. Chairman was Mohammed. A confident young man who liked to get things done. After 4 days of interviewing, singing, editing and voice overs, the crew had produced a 20 minute radio programme. All 14 members were rewarded for their efforts with a packet of Haribo and a pen. All gratefully received!
After 7 days in such a remote area, Dad and I retreated to the chimp sanctuary called Tacugama, along with two other English volunteers – Kit and Eddie – for a couple of days R&R. In the middle of the forest where all we could hear were the sounds of woodpeckers, the chimps singing and the odd bush baby at night! However, we were quite spooked by the stories of Bruno and the other 30 chimpanzees who had escaped in 2007. Remember, chimps are 5-8 times stronger than a grown man!  Although most of them returned of their own accord to the sanctuary, Bruno is still on the loose!
Fed, showered and refuelled with Laughing Cow cheese and Dolmio pasta, we returned to Lumley school in Freetown. This time we were staying in Miriam’s flat (which thankfully has a flush toilet and not just a lizard infested latrine).  We did a similar project with the Lumley crew, but this time there was a theme of TB. Over the past few years, EducAid has lost several students to this disease. Like most African countries, TB is endemic in Sierra Leone. Treatment is free and very effective.  However, sadly TB often goes undiagnosed. The radio programme was a follow up to the recent awareness campaign the school had been promoting in assemblies. This time, after just 3 days, we had a finished product. Both programmes were played to both schools in assembly and were very successful!
Dad and I spent the final couple of days soaking up the sun. On the very last day we visited the children’s hospital. This was the biggest eye opener for me. It really hit me how lucky we are to have just the basics in hospitals, like a bed per patient, working fridges which store bloods and medicines, not having to share oxygen masks and even space for mummies to stay with their new born babies.
Then I headed back on the 20 hour journey alone. I had the most amazing and extraordinary two weeks, I’ve learnt and seen so much, but the memories that will stay with me are the stories from the individual students. From the most hideous stories of the war, to their achievements through EducAid’s support. The friends and smiles that I have met have all been amazing. The trip just wouldn’t have been possible without other people’s help. I’d like to thank all the lovely staff and students who were welcoming, smiley and made living in those conditions bearable. Also thank you to the other English volunteers out there – Pat, Kit, Eddie and Sean who showed us around and were a great team. And finally, a big thank you to Miriam Mason-Sesay for inviting me to see the amazing work EducAid is doing.
www.educaid.org.uk
www.tacugama.com
www.welbodipartnership.org/our_work.html
And the links to the radio programmes are:
http://www.communityalbums.com/music/tb-can-be-cured
http://www.communityalbums.com/music/educaid-rolal-today 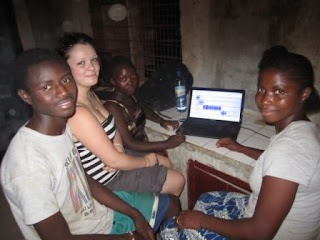 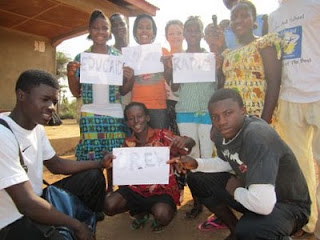 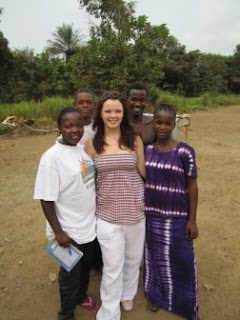