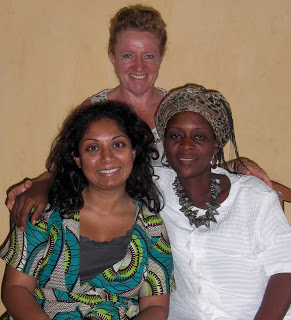 Sabrina of AdvocAid on the left. Dr Rugiatu of Amazonian Initiative Movement on the right. 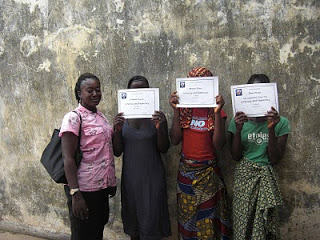 Teacher Esther, with three of her pupils, preserving their identities with their new certificates. 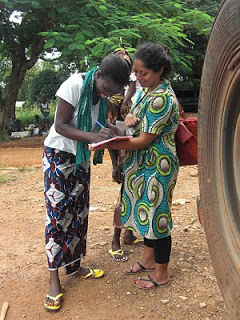 Adama, now a free woman, signs her name for the first time, to receive her welfare allowance. 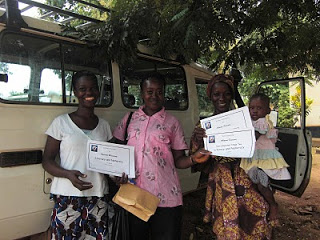 Esther with her two ex-students with their certificates as they go to make a new life for themselves. 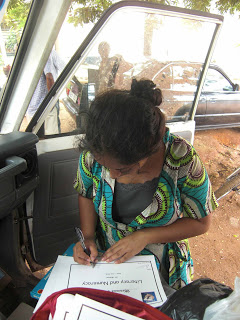 Sierra Leone does now [thanks in large part to pressure from the international donor community rather than from domestic pressure or political will] have some quite good gender equality laws on its books. It will take some time however for this to be reflected in reality. Sierra Leonean women struggle to access anything close to equality or, maybe even more scary, settle in the main, without a struggle for something a lot less than equality. There is little expectation of equality, little experience of equality and indeed little belief, even among women, in their equality. It is therefore especially impressive to meet women who break that mould.

EducAid has for some time been working with AdvocAid, contracted to run their literacy classes in the women’s wings of the Central Prison in Freetown and Makeni and Kenema prisons. Sabrina works tirelessly on all issues relating to increased access to justice, welfare and rights for women in prison in Sierra Leone.
This week I went with Sabrina to Makeni for the first certification ceremony of the women who participate in the literacy classes, had sat their stage 1 and 2 tests, respectively, and passed. Apart from being under the impression that we might well melt [Makeni is ridiculously hot and humid!], we had an encouraging little gathering. The women are enthusiastic about what they are doing. Most have not held a pen before and were never allowed to pursue education when they were younger. This marks a big step in their likely access to independence.
Two of the women have actually been discharged since sitting the tests and will be able to take their certificates with them into new lives of freedom. One is particularly keen to continue her education and may join one of the EducAid schools. AdvocAid is able to support prisoners with a small welfare package when they are discharged, to enable them to go home and start with the makings of a livelihood [small scale market trading probably] so as to avoid returning to the streets where they are vulnerable and likely to be picked up again for either real or imagined offences. Adama signed her name for the first time ever to receive her package and was clearly tickled pink to be able to do so for herself.
On the way to Makeni, Sabrina and I stopped off to meet a truly impressive Sierra Leonean woman, Dr Rugiatu who founded and heads up the Amazonian Initiative Movement [AIM]. Female circumcision is extremely widespread still in Sierra Leone. Approximately 90% of all Sierra Leonean women are circumcised, almost always at an age when they are not in a position to know what they are doing and very very often against their will as it becomes clear what is going on. It is a totally taboo topic. No politician will touch the subject. It has become accepted in theory, that forced circumcision of women under 18 is assault but the reality is that nobody will ever be successfully prosecuted for doing it.
[Just as an example, this holiday, we had to protect a 14 year old girl from being taken, against her will, to the provinces for circumcision and likely early marriage. Her family have shown not one iota of interest in her since she moved into EducAid three years ago, a very neglected, hungry little girl and now are desperate for her to go to see her grandfather. The likely story is that he and the family have received money from a man in their village / neighbourhood in order to marry her and now it is time for the man to see what he has paid for. Had we relented, she would have lost her education, her rights to have an intact body and very possibly her right to choose her own marriage partner when the time comes. This is still very common practice here and in much of West Africa.]
This is the battle that Dr Rugi has taken on and is working with great success on missions of family literacy, human rights education, and female empowerment to combat this dangerous practice.
I found myself in very august company but greatly optimistic that, as with AdvocAid, EducAid can partner with AIM and join the fight to empower girls and women to access their rights.
If you are interested in knowing more about EducAid’s work with vulnerable Sierra Leonean youngsters, please go to www.educaid.org.uk

2 Responses to A privilege to work with some impressive women.

NOA in action for EducAid
Baby Deen’s ‘Pull na do’