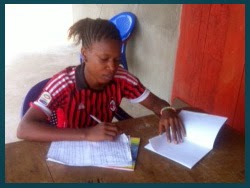 Salamatu Conteh is a student at EducAid. Over the past few weeks I have asked all of our Site Coordinators to find people who have directly experienced the effects of Ebola, and to interview them so that we can tell their story. Brima is one of EducAid’s most senior staff in Sierra Leone, and he has undertaken a really honest interview with Salamatu so that we can truthfully and faithfully tell her story.

Salamatu’s story is one that encapsulates the human struggle of Ebola; the human struggle that many media outlets forget to tell: that of loss, and of mourning. Fortunately, Salamatu had an education and a home to return to – something that many Sierra Leonean children do not have, and something she came very close to losing.

The past 9 months have been harder on Salamatu than they have been for many; Ebola has ripped a hole right through her family, and all she has left is EducAid. This is her story:

Salamatu is a student at EducAid Lumley, equivalent of the senior secondary level two, and should be sitting the WASSCE exams in a years time. She has been with EducAid for 5 years, starting at Junior Secondary level and has transformed herself from being a weak to mediocre student to being our strongest female science student.

Here is Brima’s interview with Salamatu:

What is your name, and where are you from?
I am Salamatu Conteh. I am from Waterloo, Western Rural Area, Sierra Leone, where I lived with my family, but I reside in EducAid Lumley.

How has Ebola affected you?
I lost my aunt on 16th September, my elder brother on 24th October, my father on 4th December, and my mother on 17th December.

Were you allowed to visit their funerals?
No, and I felt so miserable.

Were you scared of catching Ebola off your family?
I was terribly afraid. I was lost in thought. Confused over what might have killed them and what to do next.

How did you avoid catching Ebola?
I used the lessons from school in EducAid Lumley: I avoided visiting, touching and attending their funerals and any other. I was terrified.

How has EducAid helped you to keep safe?
Being at EducAid has restricted my movement and contact with Ebola. They have us all on regular treatment to avoid Malaria, worms and malnutrition.

What do you think about the work that EducAid is doing for Ebola?
They are really helping the young and old from keeping out of Ebola’s way and to be safe. They are great!

What are the biggest challenges that the country faces regarding Ebola?
My country lacks the resources and manpower needed to fight and put the disease under control and out of the country. This has affected many of the functions of society and government. Everyone is almost fear stricken.

How are you helping in the fight against Ebola?
I am helping others with the constant reminder of the routines to keep safe: regular washing of hands with chlorinated water, restricting movement and contact, avoiding touching the sick and dead or visiting funeral homes and burial ceremonies, to name a few. 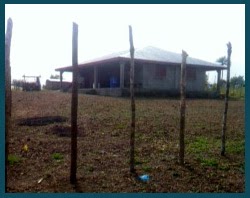 Salamatu’s story is one that is repeated throughout the country: whole families ripped apart by this merciless virus. At EducAid our main priority throughout the outbreak has been to protect our staff and students on our facilities. Our number one objective is to remain Ebola-free, and to achieve this we have some strict policies set out throughout our network. One of these policies is to restrict all of the movement of staff and students to the absolutely necessary minimum. Anyone who contravenes this rule is not allowed to return to our site.

Salamatu, despite all of her education, Ebola training, and sensitisation, in her grief-stricken state did not adhere to these simple rules. Salamatu walked out of the EducAid Lumley compound without permission to collect money for her on the 16th December. This date coincided with the eve of her mother’s death, and it was presumable that she must have been to see her mother who was clearly very ill at the time. Because of this unauthorised trip off of school property, Salamatu was refused re-entry. However, fortunately for her, we had just been granted permits to run our ICCs and she was accepted there. Instead of being in EducAid Lumley, Salamatu is currently in the Maronka Interim Care Centre undergoing an observation period of 21 days. Salamatu is now doing well. She is clearly harrowed by the experience, and feels a deep sense of loss for her parents.

What is inconceivable to anyone who has not been in Salamatu’s position is the feelings of loss and grief that she must have felt when her mother died. Having been stripped of her whole family, Salamatu was left with nobody left to fend for her, and in this daze of fear and grief she made a mistake. Her description of events is telling; she uses phrases such as “terribly afraid”, “terrified”, “I was lost in thought”, “confused and perplexed” to describe her actions. As I have mentioned before, there is no room for mistakes when dealing with Ebola – Ebola mistakes are more often than not deadly. Fortunately for Salamatu it seems as though she will be okay, and will soon be able to rejoin her classmates at Lumley.

Finally, here are a few words from Brima. I asked him to update me on the battle against Ebola:

“Many people are being helped by the EducAid teaching programmes to keep safe. At Maronka, we have helped our entire community keep out of Ebola’s way by not only teaching the instructions but also following up on routines and treatment to make assurance double sure.”