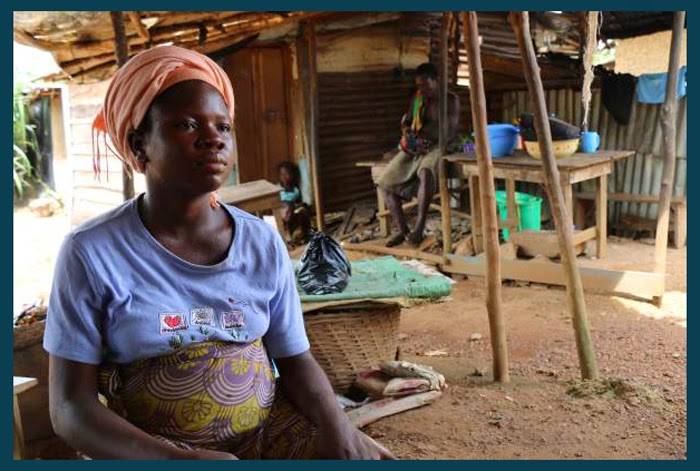 If you have been following the blog closely for the past few months, you will have noticed a continuing theme that runs through all of the accounts coming from Sierra Leone. Every individual that we have interviewed in our ‘Living with Ebola’ series has raised teenage pregnancy as one of the major concerns in the aftermath of Ebola. There have been several suggestions as to the root cause of this phenomenon but, until Plan International released their report on the subject, it has been difficult to comprehend the gravity of the issue and the many – often malicious – forces driving these rising levels.

We have already reported that, as the primary caregivers, women are disproportionately at risk from Ebola. Tending to the sick has put women on the frontline of the fight against Ebola and, as the many instances of doctors and health workers contracting the disease shows, even with training and proper medical facilities it can be extremely difficult to avoid contracting the virus. More often than not women in both urban and rural communities are the first to respond to the sick and the lack of practical information and basic medical supplies have caused the virus to cut those caregivers down prematurely. Although this has been of serious concern during the outbreak, it is important for us to recognise how else women are being disproportionately affected by the outbreak so that we can try to help them with the greatest efficacy. In this post, the first of two halves, we look at some of the driving factors that are influencing these increased rates of teenage pregnancy in Sierra Loene.

Some situational factors that have lead to the increase in teenage pregnancy are paralyses of commerce, education, and movement. The closure of schools, geographic isolation, and reduced employment opportunities have lead to young people having little variety by way of things to occupy their time. This is accompanied by a general lack of social structure. Blog posts by the Thomson Reuters foundation illuminate this matter by telling a number of Ebola mothers’ stories:

““I heard of 15 girls in this village who have become pregnant because they’re not going to school and have nothing to do,” says Abibatu, 16, who before the schools closed due to Ebola was head girl at a school in Moyamba. “Some of them are as young as 13 or 14,” she adds.

Sixteen year-old Ngadie got pregnant in September, at the height of the outbreak. She says she knew the father, but being out of school gave them more time to play around.

“I knew the father for a year before I got pregnant. I would meet him after school at his house. I don’t know how old he is, about 25. We were in love. I don’t feel good because schooling has stopped. My friends will go back to school whereas I will have to stay at home to take care of the baby.””[1]

Promiscuity is a rather predictable outcome of forced isolation in one’s community, but the consequences of that promiscuity lay much heavier on the woman. Without the sexual education or contraceptive methods that are available in the UK, pregnancy is often the outcome of sex. Regularly, if a child is conceived out of wedlock, the mother is left to fend for the child and herself with little or no input from the absent father. Whilst the lack of daily structure and movement has lead to greater levels of youth promiscuity, there are several more sinister consequences of this forced isolation.

Rape in the Community and in the Home

Throughout the region there are reports coming to the authorities that girls are being raped while they are in the home. During the idleness induced by Ebola, family members and community members succumb to the temptation of sex, ignoring the lack of consent from their victims. Regrettably, the lack of education and respect for human dignity is causing women to pay a severe price during the Ebola outbreak. Rape is not only occurring within communities; in a blog post by Al Jazeera’s Nina Devries, the reporter writes that the International Rescue Committee (IRC) reports that marital rape is also on the rise as a result of the Ebola outbreak. A member of the IRC said he was told of a case in which a male Ebola survivor raped his wife before the three-month waiting period ended. She caught the virus and died.

Marital rape, while illegal in Sierra Leone, is common and rarely reported according to women’s rights advocates. Tania Sheriff, the executive director of a local organization called the Rainbow Initiative said “there is a stigma, a shame for these women. Many are told to keep it quiet and within the family because they are so financially dependent on their husbands.”[2]

The consequences of the geographical isolation under Ebola are multifaceted, and invariably women suffer greatly at the hands of the communities in which they live. Rape within the community and within the family is becoming more common as general discontent with the Ebola situation grows. What’s worse is that, along with the physical and psychological trauma of the event itself, the shame perceived by communities means that rapists are seldom brought to justice. It is only imaginable what the lack of prosecution – or even recognition – of the rape must do to the sense of self-worth of the victim.

The women most vulnerable to the disease – those that have had their parents or breadwinners killed by Ebola – face even greater stigma. Stigmatisation of Ebola survivors and carers, even if those who have displayed no signs of the virus, has been widespread, making it even more difficult for those women who desperately need care and support to survive. The Plan International report notes, “Those stigmatised by Ebola find they cannot buy food even if they have the money.” As primary caregivers in the typical Sierra Leonean home, the responsibility will often fall on young women to care for a family who has lost its parents and traditional breadwinners.

Interviews with young women and girls in the Plan International report exemplify this. There are great concerns, the report said, that these girls will never return to complete their education, putting them at higher risk of exploitation in the future. One young girl in the town of Ganta told the interviewer, “I am used to being cared for as a child, but I am caring for my young siblings and even for my father, as a mother, since I lost my mother to Ebola.”

Not only are these young women often grieving over the loss of their loved ones, but they are being given more responsibility over their siblings than ever. Compound that grief and responsibility with the banishment from their home communities, these girls are being left with fewer and fewer options to provide for their dependents.

Unfortunately, many of these young girls are being driven to prostitution as a the only way to make a living for their young families. Girls as young as 12 and 13 have been reported to have engaged in some sort of transactional sex in order to provide for their dependents. As a result, the stigmatisation of Ebola survivors and orphans is also directly contributing to the increase in teenage pregnancy. This is a driving factor that we will investigate in much greater detail in tomorrow’s post. First, we should understand why teenage pregnancy is so harmful both to the individual, and to the society at large.

The Consequences and Dangers of Teenage Pregnancy

In this post we have looked at some of the influencing forces behind the increasing rate of teenage pregnancies. It is important to recognise why this is such a risk for the wellbeing of the future mother as well as the child. Teenage pregnancy totally disempowers the mother; it takes away the already limited options of education, a career, and an independent life away from, and it is also poses a huge health risk.

According to WHO, adolescents aged under 16 years face four times the risk of maternal death than women in their 20s. The death rate of their babies is about 50% higher. Miscarriages and stillbirths are on the rise, and charities in the UK’s Disasters Emergency Committee (DEC) estimate that one in seven women in countries hit by the Ebola epidemic could die in pregnancy or childbirth because hospital services are overwhelmed.

With fistula, prolonged labour and other complications all notable symptoms of teenage pregnancy, the lack of sufficient care during pregnancy and at birth is of particular concern. Aside from the dangers of teen childbirth, Sierra Leone lacks the medical facilities to handle these cases. With the medical facilities dedicated to the removal of Ebola in the country, many of these women are being denied healthcare services when they most need it.

It is clear that we need to address this upward trend in teen pregnancies and to help limit the damage that it does to these young mothers. There are several ways that we can do this; providing support and an education for their children so that we can avoid an endlessly repeating cycle of low education is a start.