The Challenge of Getting Students back to School 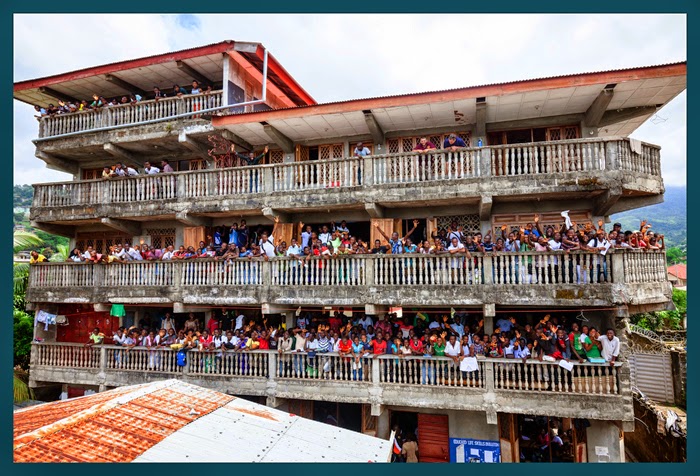 Schools are open, but attendance is low. There are several things affecting the cautious and slow return to school for Sierra Leone’s youngsters. Roeland Monasch, Unicef’s Sierra Leone representative, who described the reopening of the country’s 8,000 schools as “a major step in the normalisation of life”, but Alison Schafer, World Vision’s mental health and psychosocial support specialist in Freetown says that “reopening schools is not just a one-off event. It’s going to be a months-long journey.”

Below we look at some of the reasons behind the slow return of students, and whether we can expect the numbers to return to normal.

Parents are, understandably, nervous and fearful of allowing their children back to schools to mix freely with other students. It’s a realistic concern, and one that we share to a certain extent ourselves.

The fear that parents are feeling was exemplified when we opened two of our schools; we had to have major community meetings with the Paramount Chief and Deputy Director of Education to convince parents that the drinks we were giving the students while they were taking their questionnaires and literacy tests we not a plan to give them Ebola. The paranoia that this invisible and indiscriminate killer has left is astounding.

School children across the country have been met at the gates with infrared temperature checks, chlorine washes, educational programmes to reinforce Ebola prevention techniques, and more stringent rules surrounding playing and touching one another.

Ebola is still in the country and, going against the previous announcement from the Ministry of Education, the schools have opened before the country has been declared Ebola free. We will be watching closely the news and figures surrounding new cases, and whether they are linked to the reopening of schools.

At EducAid, our staff have been actively engaged in fighting Ebola from the outset, so we have the facilities and training to minimise the threat of an Ebola outbreak. Having said that, the utmost caution and discipline will be taken at every step.

Due to the widespread destruction that Ebola has caused, more than 8,600 Sierra Leonean children lost one or both parents to the disease. Family finances and the general economy are at a desperate low, with many children forced to find work to support themselves and their families.

“It will be hard for struggling families to sacrifice even that small income and send their children back, especially girls,” said Alison Schafer.

Fortunately, EducAid does not charge any fees, nor do we require any of the potential financial barriers to education such as clothing or educational materials. As you may well be aware, our fees are: excellent attendance; excellent behaviour; and excellent effort.

In an article by The Guardian, Sylvester Meheux, a headteacher in Rokel, says that in many cases the students “have been trading and are now used to having a little bit of money.” This makes the challenge of bringing these students back to school that much more difficult, and bringing this new-found independence back in to the schooling environment.

This is a challenge that we will face on a student-by-student basis, and one that we are prepared for.

Teenage pregnancy has been a huge problem, and one that we wrote about in two previous articles: Teen Pregnancy & Sexual Violence – Unseen Consequences of Ebola (Part 1 & Part 2). This group, girls that have already lost so much to this disease, will not be allowed back because the government has refused to lift the ban on pregnant girls attending school.

Fortunately, we will not have to abide by this ban if we find that some of our girls have fallen into this trap. The Ministry of Education is digging it’s heels in on this item for government schools though, and we know that many futures will be lost with this decision. In a country where women are already at such a disadvantage, they are being punished for actions for which they should either share responsibility or, unfortunately, share absolutely no responsibility or blame in. To read more about this, do read the blogs linked above.

Disengagement is potentially one of the biggest problems that we will have to encounter. Like child students across the world, a year out of education – under any circumstances – will make it incredibly difficult to return to the structure of school. Add to that the lost skills and investment in the school and examination system, these students will need so much support to get them back to their studies.

“Amid the relief and excitement of returning to school”, says Alison Schafer, “there would also be fear and anxiety – which was why World Vision had helped train more than 1,000 teachers in psychosocial support skills. Although children may be concerned about the possibility of catching Ebola in the classroom, they are more worried that they’ve forgotten everything they’ve learned,” she said. “They’re anxious about whether they can ever catch up.”

People in the country are quietly positive, however. Many people in Sierra Leone do recognise the importance for education, and it has become a something positive in the world since the civil war. Increasingly, children have better access through both government and NGO lead programmes.

“The turnout is small but we hope more will come by the end of the week,” said Sylvester Meheux, Rokel’s headteacher. “Some children have dropped out but the bulk will return.

The problem is, of course, the longer that they stay away from school, the harder it will be to get them back. With nearly a year out of school already, every day it gets more difficult.

The good news is that EducAid will be reopening our schools on the 27th April. We are a lifeline for so many children, it will be good to get back on to our mission. The excitement within the schools is palpable, and our staff have been busy preparing for the students return. Not long to go now!