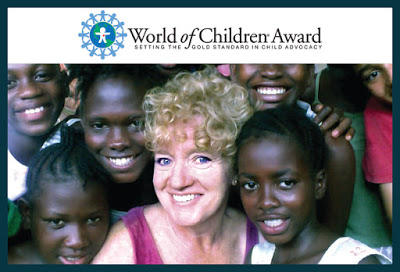 This month, Miriam Mason-Sesay was bestowed an honour that few are worthy of. The World of Children award is an extremely prestigious and unique organisation that scours the plantet each year for the most effective change-makers for children worldwide, thus improving the lives of the most vulnerable.

The World of Children describes itself as an organisation that, since 1998, has invested $7 million in cash grants and programme support to more than 100 Honorees. They estimate that they have touched the lives of 30,000,000 children around the world, with those children being rescued, rehabilitated, educated, given counselling, and receiving urgent medical care.

The World of Children was founded by Harry and Kay Leibowitz. In 1996, Harry had a vision for World of Children when he was recovering from cancer surgery at age 55. Watching the Pulitzer Prize announcements on TV, he noted that while there was a Pulitzer for art and literature, and a Nobel for the sciences and peace, and an Oscar for films, there were no awards for those who were tirelessly serving children in need.

That realisation was a catalyst for Harry, and he subsequently founded World of Children with vital support from Starr Commonwealth. Harry then pledged to dedicate the rest of his life to creating a prestigious awards program, to support social change makers helping children in need around the world.

Harry Leibowitz believes that you don’t have to be Bill Gates to make a difference. All you need is a genuine desire to help. As Harry puts it:

The World of Children say that each of the 2015 Honorees has created life-changing programmes that benefit children in countries around the world. They are working on a wide range of issues, including homelessness, teen pregnancy, and life-threatening medical issues.

At this year’s Awards Ceremony, World of Children Award will present the first ever Education Award. Asked about the decision to add an Education Award to the program, Leibowitz shared that the Board of Governors recognises education as a key component of elevating young people out of poverty, out of trouble, out of dependency, and on to a better life. He pointed out that 60 million children worldwide do not receive even basic education and that, in view of the magnitude of the issue and the large number of education-related nominations the organisation receives each year, it was vital to establish an education award category.

It is without a doubt a huge honour for Miriam to win this award, but one that we are sure you’ll agree that she wholly deserves. Miriam will be travelling to New York City next month to receive her award, and the event will provide the platform for Miriam to raise awareness and funding to continue the growth of our charity.

Congratulations to Miriam, and to the whole EducAid organisation without whom the high-quality impact would not be delivered. International recognition significantly helps those that are involved at EducAid to keep doing what they are doing, but it will not take our focus from what really needs to be achieved: the sustainable and holistic education of vulnerable children in order to raise them out of poverty, and to create a prosperous and corruption-free Sierra Leone.

If you would like to read more about the World of Children Award, or indeed other winners, you can find our more on their website: www.worldofchildren.org