It is my regular cry to my students that alone, standing against the constraints of poverty and the ruthlessness of corruption, they will almost certainly fail, but together they cannot be ignored and overrun so easily. Together they can constitute an army for peace, an army for change and it is their responsibility to sharpen their weapons [their minds] ready for the fight.

At times it feels that EducAid is a tiny oasis of minds willing to stand up for truth, but this week I have been excited by some of the inspirational people I have met: a couple of Sierra Leonean doctors who are passionate about bringing change to the medical situation in Sierra Leone. They run a hospital for the wealthy and use the profits to run another one for the poor! Also a lawyer who stands against the tide of fraud and corruption and maintains her self respect. She has thus gained a very unusual and highly prized reputation for being unlike the mainstream. Finally a Cameroonian lawyer seeking to start an institution in Sierra Leone with ethics where law, accounting and business are conducted with morals as a beacon of hope to those youngsters who aspire to success, but who want to maintain their ethics and self-respect. If such like minds can come together and achieve such standards and expose the lie that corruption is the only means of success, there is indeed hope for tomorrow’s Sierra Leone.
….On a more mundane note, the store now has concreted steps 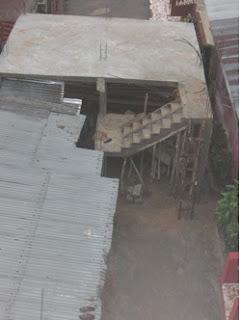 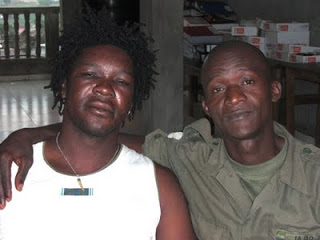 continues to recover. He is pictured here with the soldier, ‘Lucky Strike’, his rescuer, who dragged him from the gutter where he had finally collapsed when he gave up the battle with the bees!