I must be back in Sierra Leone 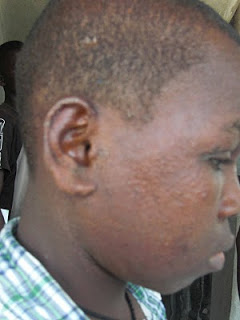 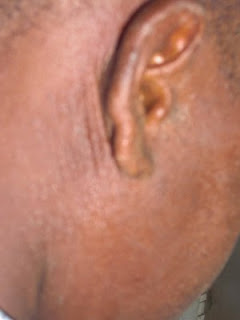 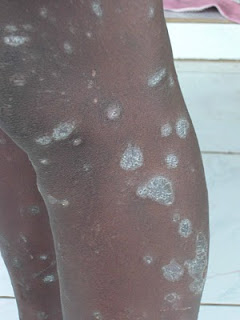 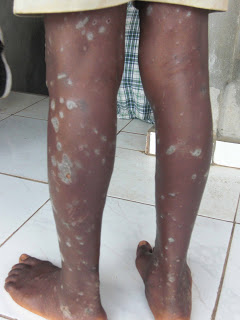 Grim skin lurgy 2 again.
Days shared in almost equal parts between hope, despair, delight, beauty, sweat, dust, anger, sadness, frustration and awe. I must be back in Sierra Leone. 10 months ago tomorrow we lost Alhassan. I still can’t believe I will never see him again. On the way back from cleaning his grave, we came across a pathetic little funeral procession with a father carrying in front of him the bundled body of his dead 2 year old wrapped in a mat. Yet another wasted life. On arrival back at the school, I was greeted by a request from a previously troublesome lad who has got his act together quite dramatically over the last few months, improving his academic output and behaviour. Having made the necessary improvements, he wants to join the LIT [Leaders in Training group]. Fantastic. Minutes later I was trying to work out treatment for two nasty looking skin diseases. The doctor had sent the first one back with a prescription for Nivea soap [must be good as it is ten times as expensive as normal soap!], calamine lotion and piriton. Using my copy of ‘Where there is no Doctor.’ it was quite clearly not an allergy. My best guess is fungal. The other one looks like eczema but he has never had it before so why should it kick in suddenly now? I don’t know. I’m a French teacher. Let’s hope hydrocortisone cream works. Certainly paying for the doctor’s guesswork seems worse than unfruitful. Next was the return of a very determined senior student who had come and borrowed some money this morning to buy a bulk load of umbrellas in order to sell them and buy one for herself with the profit. She is a hardworking and tough young lady and has pulled herself, through sheer effort, out of many trials. Today, she has once again achieved her aim and in record time. The accounts are on their way [late but with integrity]. Kofi, KK and Miriam Tholley are playing celebrating imaginary birthdays. There seem to be two competing parties playing their music in loud competition just outside the school. The carpenters are hammering mosquito nets into the window frames. The live-in kids are enjoying playing and shouting about football. The handbrake on the land cruiser has stuck and needs urgent repair as the wheels don’t go round any more. The internet is so slow that this is the second time of writing this and I will likely be trying to send it for some time. There is gari and beans for lunch [oh and for supper : )]. I must be back in Sierra Leone.