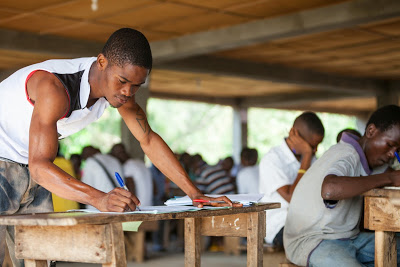 Pirez is a man who has come all the way through the EducAid system, and someone that
typifies everything that we stand for. We asked him a few questions to give us an overview of
what life is really like on the ground in Sierra Leone, from someone who is
fighting the battle every day.

People are
very scared, but they are still trying to go on with their normal lives. This
is made very difficult due to the restrictions imposed because of Ebola; some
people are trying to work, but many sectors have been closed down. There are
both restrictions on certain businesses and markets, but many people are scared
to receive people in to their shops for fear of Ebola. The morale in the
EducAid schools is cool and calm; people are getting with their normal daily
lives, though it is very worrying. It is most scary when there is a
potential threatening situation close to us. Ebola affects every single Sierra
Leonean; not only does everyone have contact with at least one person who has
died or is ill with Ebola, many regions are closed down. This means we all
suffer equally.

What do you perceive to be the greatest threat to
Sierra Leone’s recovery from Ebola.

The economic
situation for many families, and the nation as a whole, is a huge threat.  The decline in the economy due to the
closure of businesses, and the paralysis of tourism will affect many many families.
I am most concerned that this also affects the resources available for the
general population for things such such as education and healthcare. There is
also a huge worry that Ebola will further damage the relationship of the people in
our society. The economy of the nation as a whole has been seriously affected,
and people are upset by the our inability to control the virus. We can see
by the civil unrest and rioting that has happened already in Freetown that the
nation is concerned and, because of this, I am worried that there will be many drop outs, young pregnancies, and unwanted pregnancies. I fear for the
children that are not only orphaned by Ebola, but finding another lost
generation.

Are people being responsible in Sierra Leone?

There are
still traditional healers operating in Sierra Leone. For example, in Mathonkara
and Matech, there were chiefs who were taking patients to their house until one
day the authorities found dead bodies in their custody. Eventually they were
sacked. The government have tried to ban all traditional healers, and I think
that the general public are becoming more responsible in terms of taking
practical advice on the preventive measures to curtail the spread of the Ebola
virus. The advice that we, at EducAid, give is: if a family member is ill, call
for the Ebola team or take them for testing or treatment at any hospital. It is also
necessary to practice the measures, ABC and AUM.
A: Avoid
B: Body
C: Contact
A: Avoid
U:
Unnecessary
M: Movement.

How can education help stopping Ebola?

What are the biggest challenges that EducAid is
facing?

Getting
funds to continue with the running of the EducAid schools. Having the Ministry
of Education turn down our broadcasted educational programmes was horrible, as
that was something that we had all worked together towards. However, the worst
thing is not having most of our students with us because this means that our
control over the disease is beyond our control or power.

We believe that ‘Sierra Leonean Ebola orphans face a situation worse
than war, and an article posted by the Guardian agrees. We are trying to prepare ourselves for the fallout of Ebola. Through
our #AfterEbola programme, we are preparing ourselves and our facilities for
the huge influx of Ebola orphans that we will need to care for.
Without
these facilities, we are – just as Pirez – likely to lose a whole new
generation to psychological and social degradation. The financial situation
that is likely to follow Ebola will leave children even more vulnerable and
susceptible to the chaos.
Please
keep supporting us in our fight to prevent Ebola, and our plan for the future.
Together we can make a difference.
Donate
to our campaign #AfterEbola now by clicking on the
link.
Follow
us on Twitter, like
us on facebook, and sign up to our blog on our website – you can find the signup
form at the bottom of every page.
If you’d like to find out more about Pirez, you
can read his story below.
Like
many of our alumni, Pirez is a child of war. It is estimated that 320,000
children were orphaned by this terrible and meaningless conflict, many of whom
were forced in to warfare, drug use, and abuse at the hands of their elders. Having
lost contact with both of his parents during the chaos of the civil war that
raged from 1991 to 2002, Abubakarr Kanu, later nicknamed Pirez, found himself
living with his step-mother on Karie Street, Port Loko.
Pirez’s
existence was a struggle for survival. When he was young, he fought for an
education and went through Primary school to sit his National Primary School
Examination (NPSE) in 2002. He recognizes the achievement when he describes how
difficult the circumstances were.

“Transportation to school was difficult, and I survived by eating gari that I
begged from my friends.”
Pirez
unfortunately had to give up going to school when the financial constraints
just got too bad. Instead, he was forced to wash bikes and vehicles in order to
survive. Then, in 2005, he heard about EducAid.
“When
I heard about EducAid, a free school, I was glad and I enrolled at the JSS.  I worked hard and sat to the BECE. In 2006, I
got promoted to the WASSCE class and successfully sat to the exam and was later
retained as a volunteer teacher.”
In
2010-11 academic year Pirez was appointed as a deputy site manager. In the same
year he was admitted to study at the Port Loko Teacher Training College on the
distance course, and later graduated with a Div. 2 in Commercial Studies.
At the
start of the 2013-2014 academic year Pirez was appointed to the role of the Deputy
Staff Coordinator for EducAid country-wide. In the same year, I was later appointed
as the EducAid 4M schools coordinator in the Tonkolili district, where EducAid
has taken responsibility for four new primary schools. This is where he currently
serves.
“My
pre-EducAid life was very difficult but now things are much better with
EducAid.  I am now proud of my life and
EducAid in my current life.
Thanks
to all those that made it possible for me.”
It is
stories like Pirez’s that demonstrate the true power of education, and of
EducAid. It is easy to forget how difficult it can be for individuals to reach
their potential in Sierra Leone; however, considering the circumstances that Pirez
came through – a youth of civil war and poverty – all he needed was the
opportunity to flourish, and flourish he did.