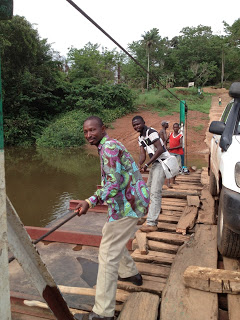 One of the big characters of EducAid was lost to us on Sunday, 13th January.  Saidu Sesay, longest serving teacher was an enthusiastic and humorous man who worked for his students and the community with great integrity and zeal.  He was head of the commercial department for many years and for the last 5 years has been a key member of the leadership team that runs the EducAid programme across its 5 sites. 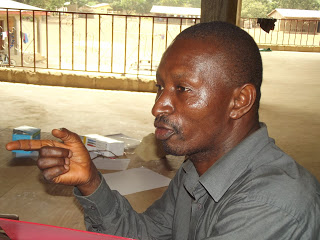 SS never did anything with half his heart.  A generous and earnest man, he would persuade and cajole until he had a whole team to undertake whatever the new project was that he was backing.

Last year was one of his hardest.  Four years ago he had a son, named him Alhassan and lost him before he was a month old.  Last year, he lost a second baby, this time within a day or two of its birth.  He has just had a third but he will now grow without his father’s care or knowledge of the great man he was, other than from the many stories that abound about his various endeavours.

In the summer, SS fell ill and although many tests were done, it was unclear what was the matter.  His family came and took him away from Freetown and back to his village to treat him the traditional way!  Despite all our best attempts to convince them to let us bring him to a hospital, they insisted that only in the village could he get better.  He made a couple of temporary improvements but the overall decline was very quick.  On Sunday morning he gave up the battle for his life.

We have lost a great brother, friend and colleague, a great lover of life and a truly community minded worker.  He was always ready with a laugh, a dance or a joke.  Apart from winning the bag of rice for the best public exam results, he also one the award for being the best eater – it is hard to remember him without a smile.

May his soul rest in peace.  May there be many who learn lessons from his life and learn to live as well as he did.

He died at 44 – just about the national average for men.  May education bring changes to the terrible life statistics and realities in Sierra Leone where so much life is wasted.
Staff and students visited the family on Monday and another group will go on Saturday.